If it hadn’t been for his cousin, Tagba Djato-Bougonou might never have found Tyson Foods.

In 2017, the engineer was working at a bank in Iowa, where he’d ultimately relocated after 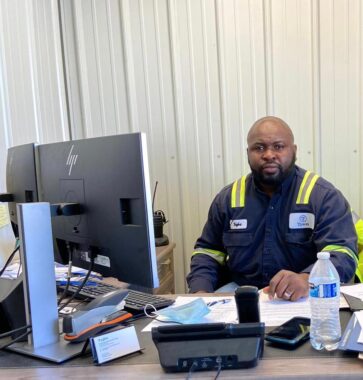 emigrating from Togo in West Africa. He was living with his cousin, who was working at Tyson Foods, when the cousin told him about Tyson’s 1+2 Maintenance Program.

“He told me about the good stuff that Tyson has and the 1+2 Maintenance Program and what I could achieve with it,” Djato-Bougonou recalls. “And I thought, ‘OK, I’m going to take a shot with that program.’”

The results speak for themselves: now a full-time project engineer in Tyson’s Fresh Meats department, Djato-Bougonou is also pursuing a Ph.D. in innovation and project management.

Tyson’s workforce initiatives are increasingly designed to find and reward employees like Djato-Bougonou, who come to Tyson with impressive professional backgrounds earned in other countries.

The success stories are numerous, including many team members who came to the company to apply for one job but, owing to education or work experience garnered internationally, were able to continue on a professional path they thought they’d had to give up.

The last word: For Djato-Bougonou and other Tyson team members who have benefited from an encouraging corporate leadership, the sky’s now the professional limit.