Ellery Kring didn’t set out to begin a career in manufacturing. In fact, she wasn’t initially focused on a long-term career at all.

“I was pretty typical out of high school,” said Kring. “I needed some money and a job.” 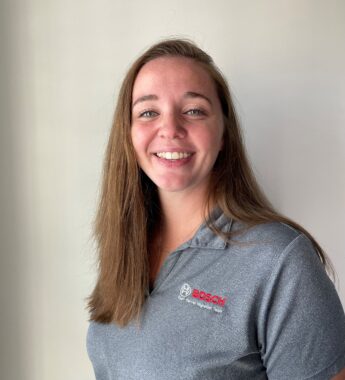 someone she knew and secured an entry-level role that helped pay the bills. But when she learned about an apprenticeship opportunity through the Federation for Advanced Manufacturing Education (FAME) program, she saw a chance to build something more substantial.

The program: Founded in 2010 by Toyota and operated today by The Manufacturing Institute, FAME aims to help students become highly skilled, sought-after makers capable of meeting the unique needs and challenges of the modern manufacturing sector.

A “no-brainer”: “Bosch is a pretty big sponsor of FAME in northern Kentucky, and I heard about it through word of mouth on the plant floor,” said Kring. “I had a strong feeling that I liked being in industry, and when I heard that Bosch had a program that would train you in maintenance and pay for your school, it was a no-brainer.”

The path: After her FAME graduation four years ago, Kring served as a Manufacturing Engineering Systems (MES) application engineer, helping to digitize the shop floor and integrate solutions to improve efficiency in production lines. Kring describes the role as “production IT”—maintaining, troubleshooting and implementing new solutions.

The support: Kring credits the FAME program with her success and especially appreciates that it allowed her to keep working while furthering her education.

The industry: Kring notes that the reality of advanced manufacturing is far different from the stereotypes she had in mind when she first began considering a career in the industry. She encourages other job seekers to give it a second look:

Kring also encourages other women to join the field and says that, while manufacturing may currently be a male-dominated industry, there are plenty of opportunities for women who are interested in making their mark.

The last word: “FAME set the path for my entire career,” said Kring. “I can’t speak highly enough about it. You can’t go wrong—it’s only a year and a half long program. It pays for your school, you get hands-on work experience, and you come out of it debt-free. It’s a quick program that has a lifetime effect in a positive way.”